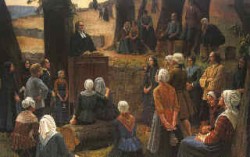 Other activities to do around Anduze

The reformed religion, which came from Geneva, was established very early in the Cevennes. In Anduze, the Frères Cordeliers who preached the Reformation from 1547, built a church (1560). The wars of religion divide the kingdom, until the Edict of Nantes issued by Henry IV in 1598.

1600 :The Anduzians take advantage of this truce to build a temple.

On the death of Henry IV hostilities resumed and gradually Languedoc became the last Protestant province, the Cevennes the last reduced.

In the 1620s , the Duke of Rohan, commander in chief of the Protestants, chose Anduzes to be his headquarters : he strengthened the defences of this "door" and brought together the Protestant forces.

In 1629 , the "Peace of Alais " requires anduziens to dismantle their stronghold (only the Clock Tower is spared ) . Thus began a long period of repression.

Under the absolute reign of Louis XIV religious intolerance is complete , the Revocation of the Edict of Nantes in 1685 causes the forced conversion of the inhabitants of the Cevennes : Dragons King terrorize people in search of renunciations .

Protestant Temples were destroyed : 1956 , destruction of the Temple Anduze .

However, despite the prohibitions and danger, the "reformed" continue to come together to practice their faith clandestinely in remote areas ( forests, caves , ravines ) .

Despite significant success rebellion was eventually crushed militarily in 1704.

She will continue sporadically until 1710 .

1787 : the signing of the Edict of Tolerance

A new temple to Anduze

1823 : construction of Anduze temple , one of the largest in France .